The excitement – and fashion – of the Kentucky Derby on display

Sunset over the Ohio River, which flows alongside downtown

Boutique shops in the NuLu Neighborhood, also known as the East Market District

Outside the Muhammad Ali Center, home to the museum celebrating the city’s legendary boxer

The ornate lobby of the historic Brown Hotel, home of the famous “Hot Brown” sandwich

Aerial view of the city’s waterfront

Bourbon, bluegrass and year-round fun in the home of the Kentucky Derby

Louisville is Kentucky’s largest city – home to both the Kentucky Derby and Muhammad Ali. Here, you can sip some of the world's finest spirits along the Urban Bourbon Trail, visit landmarks honoring some of history’s greatest influencers and dine at award-winning restaurants – all in the same day. Louisville welcomes visitors with authentic regional experiences and, of course, that special Southern hospitality. Settle in and stay a while.

Boxing great Muhammad Ali was a Louisville native. Visit the Muhammad Ali Center, the gym where his boxing career started, his childhood home, his burial site at Cave Hill Cemetery and much more on the self-guided “Footsteps of Greatness" tour. Another local native is the Louisville Slugger baseball bat. See how these iconic wooden bats are crafted at the Louisville Slugger Museum & Factory. The Frazier History Museum is the starting point and welcome center for the Kentucky Bourbon Trail, a collection of distilleries that specialize in Kentucky’s best-known export, bourbon whiskey. Take a side trip to nearby Hodgenville, Abraham Lincoln’s birthplace. Of course, you can’t say you’ve been to Louisville until you tour Churchill Downs and the Kentucky Derby Museum where the annual Kentucky Derby horse race is held.

Food and Drink of Louisville

With more than 2,500 restaurants, including several James Beard Award nominees, Louisville’s dining scene showcases both international fare and upscale cuisine. But, there are a few regional specialties to try to get a true taste of Louisville. First is the Hot Brown sandwich. This open-faced sandwich is piled with sliced turkey and bacon, covered in a French Mornay sauce (a béchamel with cheese in it) and broiled. Try it at the Brown Hotel, where it was invented in 1926. Follow that up with Louisville’s official cocktail, the bourbon-based Old Fashioned, at one of the bars, restaurants or distilleries on the city’s Urban Bourbon Trail. Explore on your own, or join up with a guide. Mint Julep Experiences offers pre-planned tours of area distilleries and breweries, some of which are combined with visits to local horse farms.

The 45-block district of Old Louisville is the largest Victorian architecture district in the USA, replete with stately mansions dating from 1880 to 1910. It’s also home to the Frederick Law Olmsted-designed Cherokee Park. A walking tour is the perfect way to see it all (and fill up your camera roll). Take a step back in time to the age of river travel on the circa-1914 Belle of Louisville steamboat, the oldest of its kind still in operation. You’ll soak in the riverfront scenery on a two-hour tour of the Ohio River. At night, walk across the Big Four Pedestrian Bridge, which spans the river from Louisville Waterfront Park to Jeffersonville, Indiana. The bridge was originally constructed in 1895 and revitalized in 2013 with an array of colorful lights illuminating its frame.

Meet Sortedfood, a group of mates from London looking for exceptional food that will make you go WOW. Game Changers are about the stories, the people and the passion behind different American delicacies.

Old Louisville is the largest preserved Victorian-era neighborhood in the USA.

There are more bourbon barrels aging in Kentucky than there are Kentucky residents.

Over 120,000 mint juleps – a typical bourbon and mint cocktail – are made on Kentucky Derby Weekend.

An Insider’s Guide to the Kentucky Derby

A Weekend in Louisville

Off to the Horse Races in the USA!

Exploring Owensboro, Kentucky by Way of The Wooks

Owensboro, Kentucky Might Just Be the Heartbeat of American Culture

Boats and Bourbon: The Perfect Pair in Kentucky

An Insider’s Guide to the Indianapolis 500

Ask a Local About Indiana

The Great Smoky Mountains: A Natural Trip From Nashville

America’s Spirits: Tour the Homes of Bourbon and Whiskey

Barbecue and Brews from Missouri to Kentucky

Bourbon, Bluegrass and Barbecue: Touring from Louisville to the Ozarks

Culinary Kentucky: In Search of Down-Home Dining and Drinks 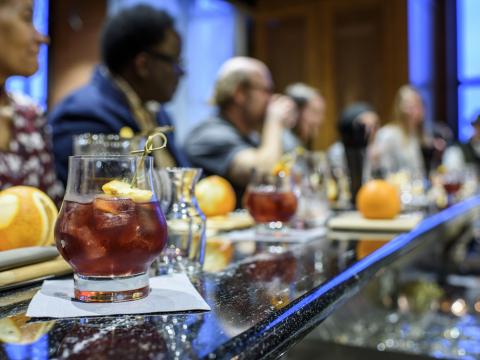 The Kentucky Oaks and Kentucky Derby

Abbey Road on the River

I Am Ali Festival

Boats and Bourbon: The Perfect Pair in Kentucky

A Weekend in Louisville

An Insider’s Guide to the Kentucky Derby

8 Delicious Sandwiches Across the USA