Golden-hued Sanctuary Woods in the fall

Outdoor dining with tulips as the centerpiece

Mt. Pisgah as the leaves are beginning to turn

Lively, small-town charm with a touch of the Netherlands

As its namesake would suggest, Holland is a quaint, picturesque city, the kind of place you go to slow down and bask in nature. And you’ll get your fill of scenic Michigan while here; it’s wildly beautiful, boasting beaches, preserves and historic towns, each prettier than the next. In spring, the cobblestone streets are bursting with tulips; in autumn, the U-pick orchards are ripe with the fruits of the harvest. A typical day here might include browsing downtown boutiques and galleries, riding a water scooter across a lake, pulling up a chair for a waterfront concert or hitting one of the best farmers markets in the state. At night, you can sample craft beer and dine on the waterfront. Clear your schedule – there’s a lot of fun to be had in this sweet spot.

Settled by the Dutch, Holland’s earliest homes were log sheds that grew out of the forest. Now, that heritage is preserved in the Dutch architecture, food and festivals throughout the city. Visit the DeZwaan Windmill, the Veldheer Tulip Farm and Nelis’ Dutch Village to see wooden shoe carving demonstrations. Explore the Dutch collection at the Holland Museum. With no less than 17 microbreweries and distilleries, Holland fully honors its hoppy roots and invites you to do the same. Locally owned restaurants and shops (100 in all) reflect Holland’s modern tastes, from book and music stores to specialty food shops and galleries.

The white, sandy beaches collected here on Lake Michigan form a freshwater playground – never too busy, and never out of season; cross-country skiers have been known to traverse them in winter. Head first to Holland State Park, where you’ll find a big shore complete with fire pits, grills, campgrounds and a pier from which to cast a line. Get a great view of Big Red, Michigan’s iconic lighthouse, from the boardwalk to the north (in summer, there are occasional tours of the lighthouse). Just east, Mount Pisgah Dune Boardwalk raises you above Lake Michigan on a 58-meter sand dune, offering sweeping views and the perfect place for a sunset picnic. Don’t miss Tunnel Park, a 75-year-old tunnel built through a dune that takes you straight out to a sandy beach. To encounter wildlife, stop at DeGraaf Nature Center or Outdoor Discovery Center, which offer preserved land to explore, exhibits, displays and play areas.

Canoeing, kayaking, riding water scooters and stand-up paddleboarding are all big deals here – both Lake Michigan and Lake Macatawa offer plenty of room for recreation. But there is as much land to cover here as water, specifically 240 kilometers of paved bike paths. You can go all the way from Holland State Park along Lake Macatawa to Saugatuck Dunes State Park on one scenic cycling trail. Saugatuck also has some of the best dune trails to hike – 400 hectares of easy-to-moderate ones, to be exact.

Holland is home to one of only four wooden bowl mills in the USA.

Holland Harbor Light – also known as “Big Red” – is the most photographed lighthouse in Michigan.

Holland is home to the largest municipally owned snowmelt system in the USA, which keeps downtown streets and sidewalks “snow free” in the winter.

3 Summer Music Festivals You Should Know About

Ask a Local About Milwaukee, Wisconsin

Ask a Local About Jackson, Mississippi

Macy’s in Chicago, Illinois: Experience the Magic at the Iconic State Street Store

The Art Institute of Chicago in Illinois: Artistic Discoveries Await

Chicago, Illinois: Underwater Views Around the World at Shedd Aquarium

Where to Shop on your Visit to Chicago, Illinois 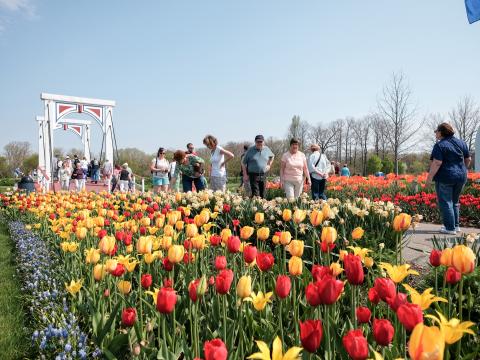 Celebration Freedom and the 4th of July Fireworks

Art in the Park